✏ How to create a React app without CRA

When I started researching this, two words kept coming up: Webpack and Babel.

So far, I'm mildly aware of their existence and have a basic idea what they do:

And there the knowledge ends, so - diving head first into the rabbit hole:

I'll mostly refer to the documentation, and try not to just paraphrase what I find in there. I won't understand much right now anyway. This stuff is complicated 🥵

I had been obsessing a bit yesterday about the "node modules dependency monster". Apparently, webpack can tame that monster: It creates a dependency graph. Starting from the entry point, it recursively goes through all dependencies and creates a tree-like structure.

The entry point in a common React application would be ./src/index.js. It usually looks something like this:

Once that graph is created, Webpack can stuff the code from all the files of your project (not just .js files - everything else that's needed in the app like .css files or even images are treated as dependencies as well) into one big file, usually called bundle.js. This file can then be included in your index.html.

So much for a very short overview. It's still a bit fuzzy in my mind.

Thankfully, this is much less complicated. Babel is a tool that converts your super modern JavaScript ES6+ code into something that even an ancient browser can understand. It also translates JSX syntax into standard JavaScript.

But now, back to the plan - initialising a React app with the absolute minimum.

First of all, I'll obviously need a project folder. Getting more comfortable with the terminal, I'll do it like the pros do:

Initialising npm will create the package.json for me:

I've left everything on default, it really makes no difference for this experiment. Note how you're asked at some point about what "main" should be. This is the entry point that I've talked about earlier.

I've already learned yesterday that all I need for React is the react and react-dom modules (you can chain them when installing them):

If you use create-react-app, the whole necessary (and unnecessary) boilerplate will just ZAP be created for you, so I'll have to do that manually now. But to be honest, I'm not sure what's more work - creating the files myself, or cleaning up the default CRA files.

First thing - we need a src folder and the entry point index.js:

The .render method wants to render something called "App" in an element with the id "root", so I'll need an index.html and an App.js file in the src folder:

Webpack also wants to be installed, but not with the usual command npm install webpack. The bundler is something that the client won't need when the app is deployed, the client will instead consume the bundled app, so it's only needed during development. The --save-dev flag will make npm aware of this, and set the entry accordingly in the package.json:

webpack-cli is the webpack command line interface. I'm not 100% sure what it does, except that it allows it to configure the build from the terminal. Find a list of available commands here.

Apparently I need four packages, and again, I don't fully understand this, but the packages are:

Throwing all that into the terminal: 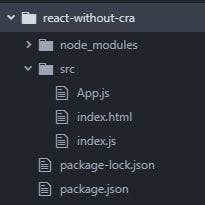 And the package.json has the following entries:

I've read that newer versions of Webpack don't require a configuration file, but I couldn't make it work without one. The file needs to be in the root folder, and the file name is webpack.config.js. It exports an object with some configuration details that looks similar to the package.json:

The only thing that's absolutely necessary here is the "module": "rules" part.

If you want to include .css files in the bundle, you'd have to install webpack's css-loader and style-loader, and add another rule like this:

Similar for other file extensions. The other parts of webpack.config.js are sort of self-explanatory. The default "mode" is "production", which results in a minified version of the bundle file. "output" specifies the directory and file name of the bundle.

To configure Babel, I need to create a file called .babelrc in the root folder, and put the following content into it:

That obviously refers to the packages I've installed. I'll just accept that Babel wants this file for some reason.

The final thing to do is telling webpack to compile my project:

I'm not sure why I need npx, but this will create a bundle.js file in the specified directory.

Adding the script to the index.html:

Now I can start a live server or just open the file in a browser, and there's my React app without create-react-app 😃

Of course it's super basic, you wouldn't want to actually work with such a minimum setup. Whenever you make changes in the code, you'd have to manually re-create the bundle file, you can't import .css files into App.js, etc...

But going through the process has definitely increased my understanding of what create-react-app is doing under the hood.

✏ Misc stuff inside the bundle file

I was curious and scrolled through the file. If you ever thought that your variable names are too long and clumsy, check these out:

Well that is what I call descriptive. This one's even better:

And finally, this cute error message 😺

Some articles that explain how to set up a React project without create-react-app and walk you through the process:

medium.com: How to Create a React Development Build from Scratch

digitalocean.com: How to Set Up React Using Webpack-4 and Babel-7