I'm still exploring a server setup with Express JS. So far, I've used it to make GET/POST/PUT/DELETE requests to the backend in my Boring Book App (starting from Day 17), and also set up another project to serve a static HTML file with express.static() - with very little code. Continuing from Day 23 (I've removed the logger function, as that was only to demonstrate how to use middleware with app.use()):

Let's say I want to create a simple API to serve and manipulate some data. I've already done that with my Book App, where I set up a few routes, going either to an /api/books or an /api/books/:id endpoint. With Express, this was easily done:

I had four functions to handle GET, POST, PUT and DELETE requests, and I wrote them all directly into my server.js file. While that worked well for such a small app, the server file would get a little clogged up when there are many routes that need to be defined. Express offers a possibililty to handle this much cleaner:

express.Router is a built-in middleware that's quite easy to use. It works pretty much the same as with defining routes directly on the app instance of Express.

What's nice about this is that I can put all the parts of the code that deal with routing into a separate file, from which I only export the router middleware:

Then, over in express.js, I just import it, and all the routes are ready to use (note that I've also added app.use(express.json), which is a body parser middleware that comes with Express):

So far, I've only set up the backend that serves a static HTML file, and an API to send back raw JSON data. If I wanted to make a real application like my Book App, where I could make POST, PUT and DELETE requests to edit my book data, I'd now also have to set up a frontend with at least a <form> and some <input> elements in order to test if the requests are working as expected. However this isn't necessary, and this is where another tool comes in very handy:

Postman is a tool that lets you make all possible HTTP requests to your backend, without actually having a frontend. 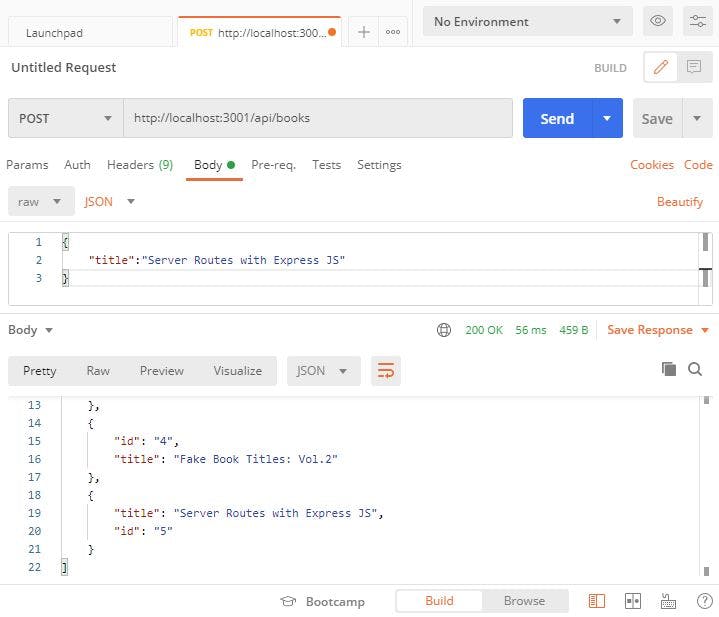 Here, you can see that I've made a POST request to http://localhost:3001/api/books. I've first set the Content-Type in the Headers to application/json, and entered some raw JSON data with a new book title into the Body field, then clicked on "Send".

In the bottom section, you can see that the server responded with status code 200 OK, and that the response includes the new, updated book list.

I haven't even begun to explore all of Postman's features, but this is already quite helpful if you're only working on the backend and want to test if all your routes are doing what they're supposed to do.