In the last post, I explored how to serve static files with a Vanilla JS server, and it was quite a bit of code. I had to manually set the Content-Type, and to do that, I had to get the extension of the requested file. Finally, I needed the fs module to read the content of the requested file to send it back to the client.

All of this gets much easier with the Express framework, because most of it is being handled for me under the hood.

First of all, I'll create an express.html, which I'd like to serve if someone visits the main directory (instead of an index.html):

Now for the server that I've already set up on Day 21:

Instead of the hard-coded <h1>, I want to serve my HTML file now.

One thing that tripped me up first when trying this out: Not making sure that I get the right file path.

Here, I've used the path.join method, which as far as I can see just inserts slashes between the given arguments, so path.join(dir1, dir2, file.ext) would return a string dir1\dir2\file.ext.

This is already working, my file gets served: 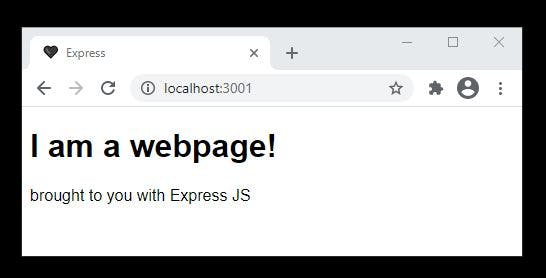 However, Express offers a much simpler way to serve static files, but first, a few words on Middleware.

Middleware is just a function that has access to the response and request objects, and that can be used to run any code you like when someone makes a request to the server. It also gives you a next function (commonly named as such, but you can rename it if you like), that needs to be called in order to proceed to the next function execution. Express offers a list of ready-made middleware that you can use, or you can write your own custom function.

To demonstrate the basic principle, I'll write a simple logger middleware, to log some details of the request object, and then invoking it with app.use, as soon as the server receives a request, for example to localhost:3001/test.html:

✏ Setting a Static Folder in Express

Let's say I have a number of static files (index.html, logo.jpg, about.html, products.html etc) in a folder called public. Instead of writing the logic myself in app.get(path, fn), all that can be replaced with one line, because Express already provides a middleware for this:

This will terminate the execution of the server script, so if you're using the logger middleware afterwards, it won't get called.

Note: If you use require instead of import, you'd have to change it to

So the advantages of Express are obvious. To have the same functionality with Vanilla JS, I'd have to write a lot more code, and Express offers a lot more than the above, which I'll cover in the next post.